The International University Sports Federation’s (FISU) first ever online World Forum started on Wednesday 12 August with the opening ceremony held at the University of Physical Education (UPE), Budapest. The event was broadcasted by one of the Hungarian sport TV channels. 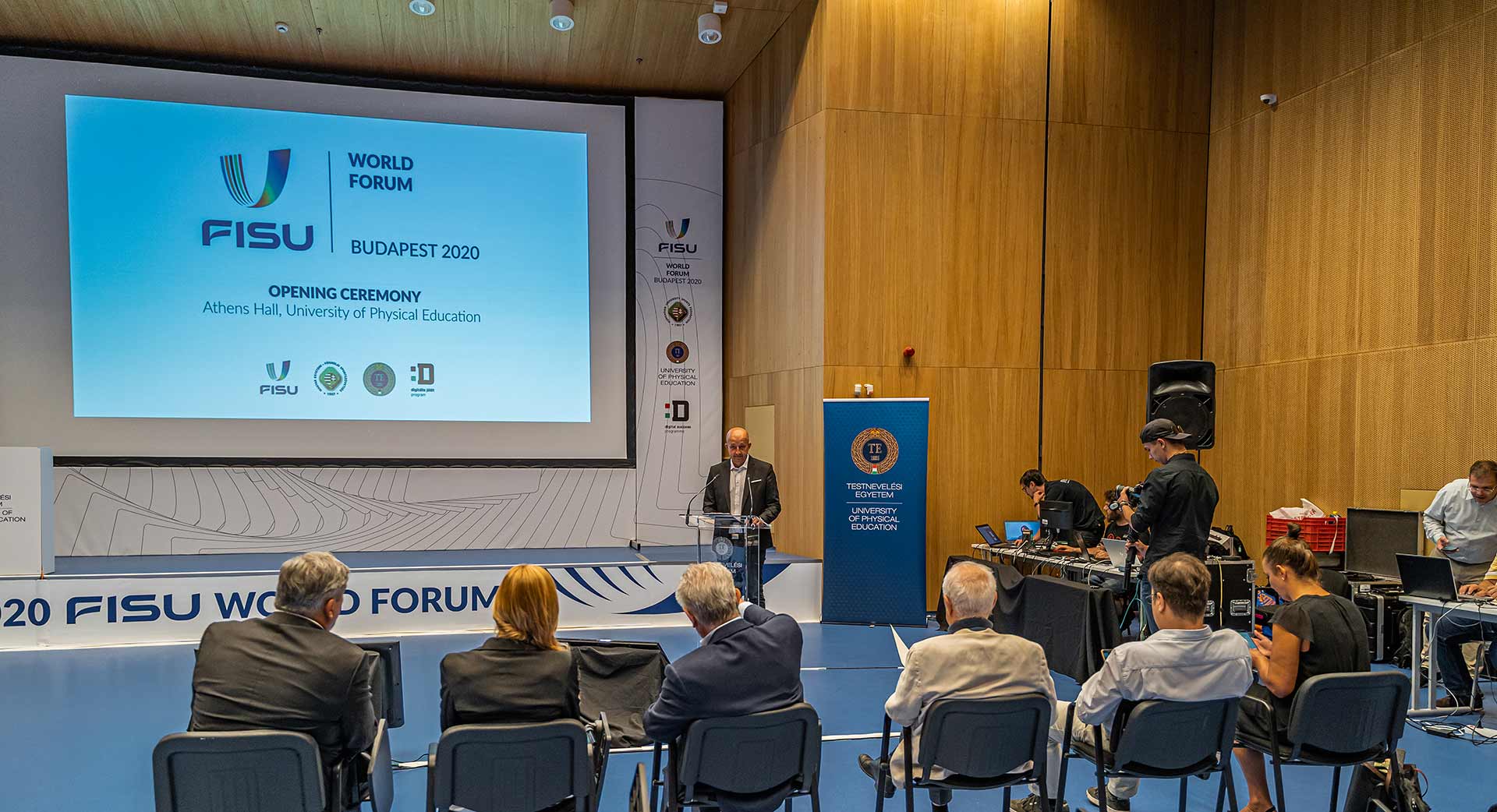 Following a tough preparation lasting almost for two months, the 2020 FISU World Forum started with the opening ceremony held at the University of Physical Education (UPE), Budapest, at 13:00 (CET) on Wednesday. As known, the student world forum, which is staged online due to the coronavirus this year, is FISU’s second biggest event.

The organisers and the FISU representatives were very pleased to see that nearly 1,400 people from 102 countries have registered, which makes it the most attended World Forum ever. The significance of the event is represented by the fact that one of the most popular Hungarian sport channels, Sport1TV broadcasted the first 90 minutes of the first day’s happenings.

It is interesting to note that UPE rector Prof. Dr. h. c. Lajos Mocsai was elected President of the Hungarian University Sport Federation (HUSF) at the organisation’s General Assembly that was held before the opening ceremony.

Hungarian Secretary of State for Sports of the Ministry of Human Resources, Dr. Tünde Szabó delivered a speech first in the university’s Athens hall. She expressed her regret that due to the pandemic, FISU has had to cancel its university sport events this year, however, she was delighted that the coronavirus could not overcome the World Forum. Then Dr. Verena Burk took the digital floor. FISU’s Education Committee President expressed her joy that it is not only FISU’s founders that have registered for the historic event but the new member countries as well. International Olympic Committee (IOC) President Thomas Bach delivered a welcome speech in a video that was played, and in an other video, FISU President Oleg Matytsin also welcomed the participants highlighting the importance of the event. Finally, UPE rector Prof. Dr. h. c. Lajos Mocsai was asked to make his speech.

“I would like to welcome all of you in the digital realm from the University of Physical Education located in Budapest at the 2020 FISU World Forum which has received more than 1,400 registrations from 102 countries”, said the rector, who emphasized the university’s role in establishing and maintaining the Hungarian physical culture. Having finished his speech, he thanked the organisers and the FISU representatives for their hard work, and officially opened the event.

The first online World Forum started with the plenary and panel discussion ’70 years of FISU’ that was broadcasted from UPE’s Athens hall. The discussion focussing on FISU’s legacy and future was virtually attended by Dr. Verena Burk, Arnaud Richard and Eric Saintrond, while Hungary was represented by two times Olympic silver medallist fencer Dr. Jenő Kamuti and former IOC Vice-President Pál Schmitt. The participants concluded that FISU’s range of activities have expended in the last 20-30 years, which, in addition to the Universiades held every second year, significantly contributes to the successful maintenance of the organisation’s legacy.

The panel discussion was followed by a roundtable discussion called FISU Global Strategy at which participants approached the issues from the point of view of FISU, the national university sport federations, university sport people and students. Workshops started at 15:00 (CET) with a little delay and then participants could watch the virtual Budapest tour guided by Olympic gold medallist swimmer Ágnes Kovács, who is UPE’s Ambassador. In the meantime, the digital chess and eSport championships went ahead in the Games Room.